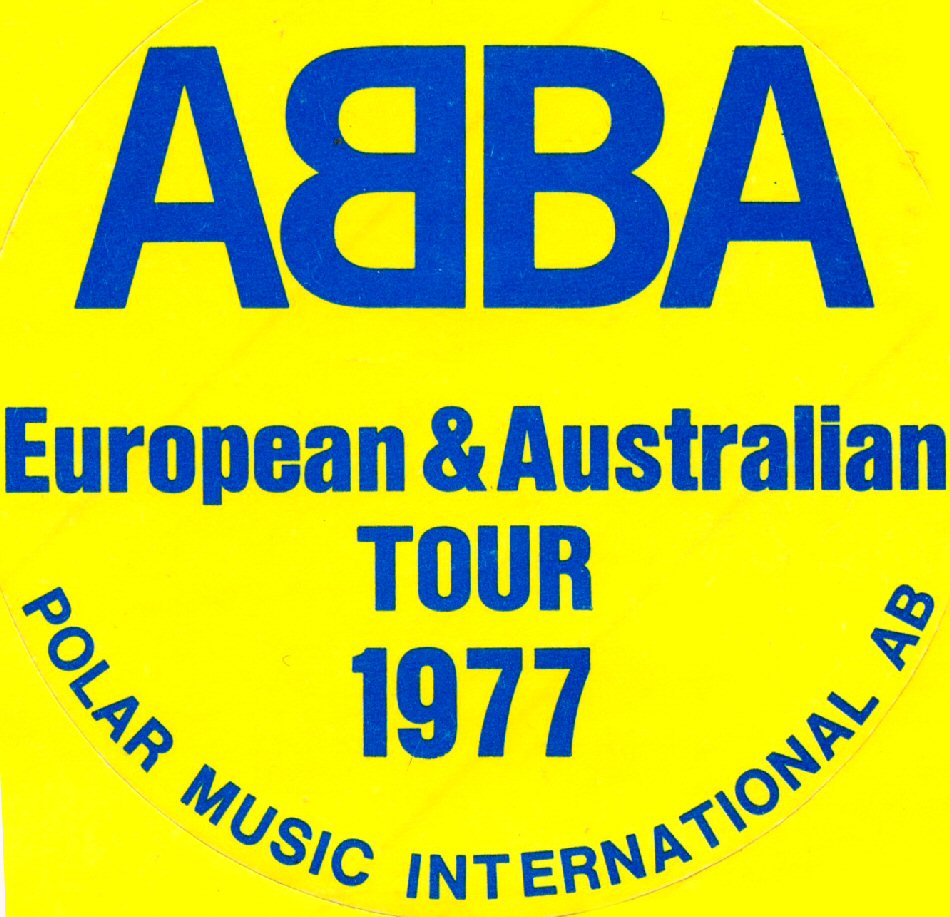 The Tour - The European leg

Early in 1977 ABBA set off on their first world tour including Europe and Australia. First stops involved hops around Scandinavia.

On the European leg of the tour alone, taking in Sweden, Denmark, Norway, West Germany, Holland and Great Britain, their concerts were seen by 90 000 people, who paid total of half a million pounds for it.

The concerts contained a new innovation and a preview peek into ABBA's future. ABBA were keen to try something new and they wrote their own pop opera - the mini-musical "The Girl With The Golden Hair".

The rehearsals started in December 1976 in the Konserthuset in Stockholm and in January they were moved to Europa Studios outside Stockholm. The girls worked hard with their choreographer Graham Tainton and prepared several dance numbers for some of the songs. One of the most known is the puppet dance as they performed "I Am A Marionette". Björn and Benny were engaged in the preparations even if they would not dance on stage. Björn could be seen for the first time with a real beard during the time before the tour. One more important part of the tour were the costumes created by Owe Sandström. He was with ABBA during the tour and helped with all costume arrangements.

ABBA on arrival in Oslo - the Fornebu airport

The day before the first concert on the 1977 Tour ABBA went sleighing outside Oslo.

The tour started in Oslo, the capital of Norway where ABBA arrived on 26 January 1977. The group stayed at Grand Hotel where lots of journalists waited in the reception. The press conference was held at the apartment 700 at 5 pm. ABBA themselves were not present though because of the last preparations before the first tour show. Some hours later the show was going on in front of 5 300 people including Prince Harald and Princess Sonja. The group sang especially for the Princess her favorite song "Jeg har en tulle med öyne blå". Even Björn's parents Aina and Gunnar Ulvaeus were present in Oslo. They came from Sweden some hours earlier. They had no possibility to meet their son before the show. First when the concert was over they joined the others from ABBA at the dinner.

Meeting with the Norwegian Royal Family

In conjunction with the concert in Oslo, ABBA received their first American Gold Record for the Greatest Hits LP which had passed the USD 1,000,000mark in sales. Atlantic Records President Jerry Greenberg made the presentation. Atlantic, which distributed ABBA in America, were also represented by Earl McGrath and Phil Carson.

In Sweden ABBA gave two concerts in Göteborg at the Scandinavium Hall with about 12.000 people in audience. On 29 January they left their handprints in cement at the amusement park Liseberg. (see ABBA related places)

Agnetha was glad this day...  The planning flight from Göteborg to Copenhagen was cancelled because of the bad weather and the group came to the capital of Denmark by car which took longer time. The concert was delayed about 30 minutes.

ABBA performed in the Bröndby Hallen, a sport arena well-known for its bad acoustics. The group did though a great show and the reactions of the Danish press were very positive.

ABBA started their German leg of the tour in Berlin at Deutschlandhalle. Germany was from the very beginning the most ABBA loving country and the group stayed there for 6 days and performing in following cities:

Agnetha on arrival in Amsterdam

The last European country of the ABBA 1977 tour was Great Britain. Totally 5 shows were given in Great Britain and it was far from enough for the British public. The tickets had been sold out several months before ABBA's arrival.

And the first of five dates was a gig on February 10 at the Birmingham Odeon. The New Street venue was capable of seating 2,500 fans, and there were high hopes that the show would sell out. In the event, the box office fielded no fewer than 50,000 requests for tickets. It was the hottest ticket of the year. Touring on the back of their Greatest Hits and Arrival albums, ABBA were big news – but Birmingham brought new challenges. Extra security had to be hired such was the fever-pitch of the fans. The group hired four burly minders to shield them from any undue attention. British fans, they believed, were more excitable than any others. On the night, the Odeon had a full contingent of stewards, and there was a police presence outside.“It is necessary,” said aide Thomas Johansson. “The audience is more forward in Britain – they want to get close to their idols and touch them.”

Dale Michelsohn, who worked as a stage technician, and who runs the Birmingham Odeon Memorial group on Facebook, recalls: “It was a gem of a show, and I remember it well. There was a film crew there all day filming us setting up.

“We had to rig a quadrophonic PA system at the back of the stalls, although it was only used for the opening of the show.

“Fans heard a helicopter sound passing overhead to introduce the band’s ‘Arrival’. As soon as the effect was over, we had to drag the PA through the doors at the back and onto the rear car park, de-rig it and wheel it around backstage.

“The backstage passes were round metal pin badges, with each evening or venue’s badge a different colour.

“Security was tight not just because of the interest from the fans but because of fears of terrorist action by the IRA. Don’t forget that in November 1974 the IRA had bombed Birmingham, killing 21 people and injuring 187 others.

“The audience had to pass strict safety checks just to get in, and the stewards were on alert. But by the end of the gig some of the fans were able to get up onstage during Dancing Queen, waving ABBA flags.”

A film crew caught the band as they arrived in the Odeon foyer, carrying out an impromptu interview. And after the triumphant show, the Swedish stars finally let their emotions show, and the tears flowed.

“It was especially scary to be playing in front of a British audience,” admitted Agnetha. “We were terribly nervous about playing that first night in Birmingham. After all, it’s classic ground in terms of pop music.”

Fan Ian Kemp recalls: “I saw ABBA in concert on February 10. It was their first concert in England and my ticket cost £2.”

Outside the theatre, however, the touts were doing brisk trade.

“Outside the doors tickets were going for 50 to 100 quid, which was a small fortune those days,” says fan Rafael Cavar. “I was more then lucky to get mine for a fiver – that was five weeks’ pocket money.

“I got the tickets in an auction in the Birmingham Mail. They could have sold out the Odeon ten times in a row.”

Thanks Charles McNab & Stephen M. from Glasgow for these rare private pictures of ABBA in action

Björn said: "A very special moment for us was at the Albert Hall in London, where the thousands of fans packed in displayed their enjoyment so much. they showed how much they liked our music. I'll never forget their reaction when we sang "Fernando" and they all joined in to sing along with us. It was electric, vibrant. For me it was a milestone in ABBA's career. I never thought I would see it happen".

Said Benny: "I remember a moment in the middle of the Albert Hall night when I thought, ´Good grief, Benny, this is you sitting here playing at the Albert Hall". The success shows at the Royal Albert Hall ended the European leg of the ABBA 1977 World Tour

The group met Australian ambassador in Sweden Mr Lance H. Barnard before they left for Australia

ABBA would participate in a new project - they would star in a movie picture about their Australian adventure. Lasse Hallström, the director, got the order to do a whole film about the tour with a little story line.

For the Australian tour ABBA hired a Boeing 727 to transport them and the 117 people working with them. 17 of these were Australian musicians who played in only two of their songs.

The first famous shots in "ABBA The Movie" come from the press conference which was held this day in Sydney.

The tour in the Australian press

Outside the Sydney Opera House

A violent rainstorm greeted their first Australian concert, which, unfortunately for them and the audience, took place in an open air arena. The 20,000 audience did not mind getting wet and wanted to stay in their seats no matter how wet they got, so the ABBA show went on. But it was difficult with puddles and a screen of water all over the stage. A team of stagehands tried to soak up the water but it was a losing battle. Everybody had difficulty in keeping on their feet and Anni-Frid, doing her gyrating as she sang, came a cropper and dented her bottom when she slipped and made a most ungracious fall. Luckily she did not hurt herself. Anni-Frid said: "The rainstorm came out of nowhere. But the audience were clearly going to stay whatever the weather to see us. So, in those circumstances, we were definitely going ahead with our show. The tumble shook me up, but that's all. It was a small price to pay when the fans were showing such a great loyality".

Thousands of fans were gathered at the airport in Melbourne to see their favourite group. The scenes from the arrival in Melbourne were used as well in ABBA The Movie. After the arrival and short rest it was time to go to the Town Hall and meet fans. 14.000 fans enjoyed ABBA's appearance on the Town Hall's balcony...

The three Melbourne concerts were held on the "Myer Music Bowl" stadium.

Agnetha and Frida purchased two T-shirts promoting the Melbourne football club AFL. A teddy bear wearing almost exactly the same outfit came to us to Stockholm 29 years later... It was a real coincidence. The first thought was "I've seen this logo before...". And I found the picture which was originally published in the Swedish weekly "Året runt" on 4 April 1977.

The show in Adelaide was attended by approximately 30.000 people both in- and outside the West Lakes Football Stadium.

The four final concerts in Australia were played in Perth where ABBA stayed for 3 days. 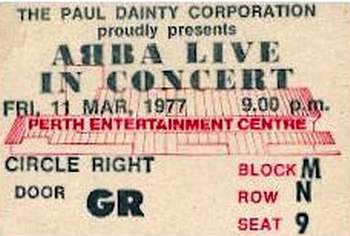 An terribly stupid accident took place during one of the concerts in Perth. An anonymous phone call informed that there was a bomb somewhere at the Entartainment Centre where ABBA played. Everyone except Benny playing "Intermezzo No 1" was evacuated. There was no bomb though and after several minutes the audience and the artists could come back and continue the evening.

After the last Australian concert on 12 March it was time to go home - ABBA came back to Stockholm on 13 March 1977.

Sitting In the Palmtree

He Is Your Brother

When I Kissed The Teacher

Knowing Me Knowing You

I've Been Waiting For You

Why Did It Have To Be Me

The Girl With The Golden Hair - a mini musical

a. Thank You For The Music

d. Get On The Carousel

Thank You For the Music